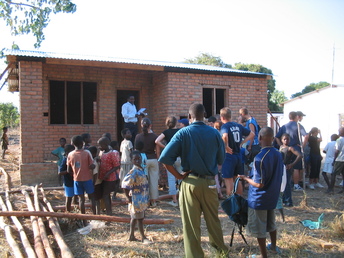 A teachers house built during the early years of MEL
Malawi Education Link (or MEL for short) began as Africa Link, in 1997, when a group of teachers in [then] Henry Gotch Comprehensive School , Kettering, Northamptonshire, set about identifying a group of 15 and 16 year-old students wanting to work in African schools.

They would also take part in social and cultural activities, as well as taking the opportunity to travel the country. By 1998, a partnership had been set up with 2 schools in Malawi, Central Africa. One was Nkhotakota Secondary School and the other was Linga Primary School, a church school in Nkhotakota. Work would also be done in Ngala Primary School, an hour’s drive to the north, if transport allowed.

The team was identified, some selection being necessary, and the students and leaders set about raising the necessary funds for their month in Malawi. The first team arrived in Malawi in 1999 and was a great success in every way, but the British Pound goes a long way in Malawi, and the team brought back nearly £7000, rather than risk it being misused. Caroline Hansford was persuaded to take out another team in 2001, and the Link has gone from strength to strength ever since, using students from Marshland High School in Wisbech, Norfolk, and Hinchingbrooke School in Huntingdon, Cambridgeshire.

In 2003, for the first time ever, 3 teams went out in one year: a 12-strong team from Marshland High School followed by a 16-strong team from Hinchingbrooke School. There was then a Gap Group of 7 Year 13 students, some of whom had been out in 2001. They stayed for 3 months, bringing some money and labour to local schools, prior to travelling around Malawi and acquainting themselves with places they had not previously visited.

Successive years have seen a steady increase in the numbers of students wanting to take part, so that in 2011, teams 24 and 25 came out to Ngala. Nearly 500 students and leaders have now visited 'The Warm Heart of Africa', as Malawi is affectionately known, bringing a total of approximately £250,000 in funds they've raised, plus donated items of use to the vulnerable in the communities around Dwangwa. Donations are welcomed and may be 'tied' to the donor's specific interests: we have received funding towards sponsoring girl students through secondary school (approximately £30/year), supporting AIDs orphans... Feedback is provided, if requested. MEL is proud to have assisted in building and rebuilding classrooms and teachers' houses in 39 schools, to date.

Registered as a charity in the UK (number 1108460), MEL now works together with Likuchi Community Based Organisation (CBO) in the Dwangwa area. Each trip is conducted with the knowledge and support of the Malawi High Commission in London, the British High Commission in Lilongwe. The local Senior Group Village Headman, Chief Kamkondo, authorises MEL's work within the schools and projects are chosen on the basis of greatest need (as identified by local Primary Education Advisers).

Communities are responsible for sourcing - usually making them themselves! - the necessary bricks, sand and water. They also identify the building team. MEL helps with items that need funds unavailable to a community usually consisting of subsistence farmers: roofing tin, timbers, window and door frames that can withstand the ravages of termites, cement. The teams get 'hands on' according to their skills and interests. This will include: limewashing refurbished classrooms and teachers' houses; painting / stencilling teaching resources on walls; teaching; exchanging skills in crafts and sports... the list is endless.

The funds raised by the teams and individuals are used for these purposes. Team members have to find their own fares and accommodation costs (currently totalling about £1700), with help from bursaries, trusts, where available. Teams now stay for 3 weeks, which includes 3 days in Liwonde Game Park, plus weekend trips to see more of this beautiful, if impoverished, country.